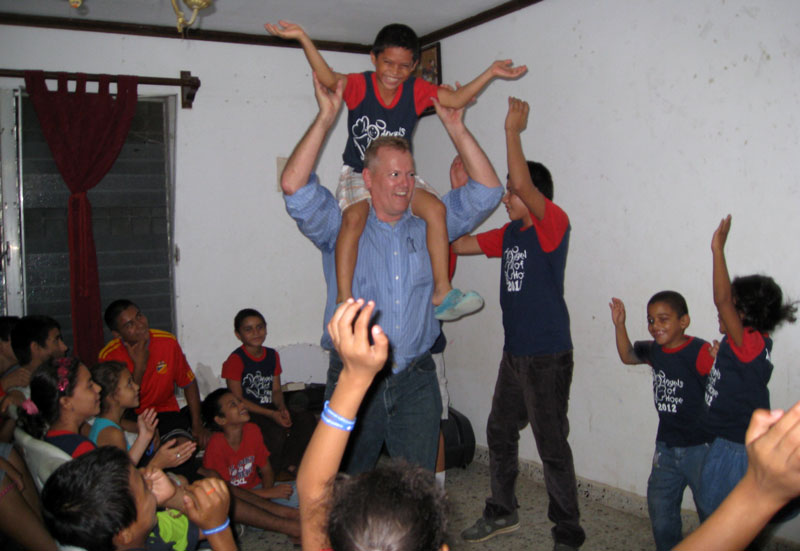 Volunteers are at the heart of what we do. Below are expereinces as told by some of our volunteers.

There they sat, all the players in the drama, in the small Canadian Embassy in Guatemala. Luz Mila, her mother, and Dan, while Dan’s father, Gord, talked with the lady in the Visa booth. Waiting, praying, pacing back and forth. And from what Dan could hear from around the corner, it wasn’t sounding good. Luz Mila and her mother, Lorena, watched his every movement and he shot them a tentative smile and thumbs up before turning his concentration back to the little room in which Gord and the Canadian Ambassador were duking it out. This day represented the culmination of two years worth of effort; applying for passports, waiting on Visa’s, choosing the best route to use to bring a 16 year old girl from the back roads of La Ceiba, Honduras to study just outside of the modern day city of Toronto, Canada.

Luz Mila grew up in a place that has no name. She grew up in a place of beauty, on the top of a mountain that looks out over the tropical rainforest of Honduras, out to the ocean and beyond. A place that anyone who visits will be overwhelmed by the remoteness and beauty of it all. Not that there are many visitors. She grew up in a place where the closest neighbor’s house is over an hour walk away and the closest town over three. There are no cars, no bikes, and no transportation except for your own two legs. She used them often, every day, walking for hours on end to attend the school that she knew was her ticket out of the situation she was born into, but always returning home at the end of the day to her dirt floor, mud and stick walled house. Her home.

You can support HHK by shopping using Amazon Smile and choosing HHK as your preferred charity. Every dollar you spend through the site gives a small portion back to us, and little donations add up over time!

"This ministry stole my heart! The kids are taken care of as you would your own, which is inspiring and humbling to see. Both in the Jungle School and the Hogar, these kids come from poverty we can’t imagine, and are molded into fine Christian young people with real hopes for a better future. I love HHK!" Alicia S. | Auburn, AL

"Volunteering since 2011, our family, and the groups that have accompanied us, are delighted to see our contributions continue to grow and multiply. But what keeps us coming back is the joy and inspiration we receive from the people and the children we thought we were coming to serve. Instead we found those people serving us through their spirit and love."Aramis A. | Fayetteville, GA

It is amazing the love that radiates from the Hogar!  After all was said and done the comment that kept surfacing the most, about the Hogar, was that WE received more than we gave.  Your kids have such big hearts and are so full of Love.  We felt like your children were ministering to us more than we were ministering to  them. Thank you children for your passion for God and Your BIG Hearts!  With tears in our eyes we Miss you, Love you and Thank You! | David and Elena Dunbar,Florida

My son and I visited the Hogar de Amor August of 2012.  The one day we spent there had a great impact on us.  The kids simply captured our hearts.  We returned with other volunteers from the Franklin Noon Rotary in March of 2013 to help with a construction project.  The world has many needs.  I choose to give my time and money to support this organization and these beautiful children.  David and his team are saints, and I know the money I give goes directly to feed, clothe and educate children.  I am grateful for the opportunity to help. | Tom Thomson, Franklin, TN

Want to learn more about the GuideStar Exchange?Click here

Helping Honduras Kids (HHK) is a non-profit VOLUNTEER organization that manages a Children's Home (ORPHANAGE), caring for 21 children who have been abandoned, abused and/or neglected on the North Coast of HONDURAS, in La Ceiba.